With this wintery kale salad, I discovered a new type of rice – black rice. A whole grain Chinese hybrid grown in neighboring Italy called Riso Venere. Its color is remarkable – it’s an intense deep purple, so deep it’s almost black. Together in this winter salad with roasted beets and purple kale, it actually gets lost among all the deep, dark, dramatic colors. Everything but its taste, that is. It has an absolutely beautiful mild, nutty and fragrant flavor.

Referred to as Forbidden Rice in China, legend has it that due to its rarity, black Venere rice was cultivated in the 18th century solely for purposes of serving the Emporer and his court. But there is more to the legend than that. It’s also said that the Venere rice was named after the Goddess of Love and that it was considered a powerful aphrodisiac, which was precisely why only the Emperor and his entourage were allowed to indulge in it. Whether rare or powerful, it was the “Forbidden Rice of the Emperor”.

For this salad, I used an assortment of kale types sold as a bunch at my local farmers market. As with any type of kale, when eaten raw, you’ll need to give it a good massage beforehand. I know, it sounds like some sort of high-maintenance nonsense type of treatment, but giving it a rubdown helps transform tough, bitter leaves into tender, slightly sweet greens–which allows you to create a tasty raw salad with “the queen of greens”. As a nutritional powerhouse, kale is packed with vitamin K, A and C, not to mention loads of iron and calcium. Seriously good stuff.

How to massage kale:

You’ll want to “massage” the kale for five minutes, or until leaves are tender. Yes, it may seem a little odd to give vegetables a rubdown, but you’d be amazed at what it can do to transform this green from being bitter and tough to silky and sweet. Massaging kale is super easy. All you need to do is take a bunch of kale in both hands (with the thicker, tougher stems removed) rub them together and repeat. You’ll see the leaves transform before your eyes; the leaves will darken, shrink in size and become silkier in texture. Voila!

I used a mix of redbor kale, red Russian kale and dinosaur kale (which is also known as Tuscan kale, lacinato kale or black kale). This can be substituted with spinach, collard greens or regular kale, roughly chopped.

Please let me know how this Wintery Kale Salad with Black Rice and Roasted Beets recipe turned out for you! I would love to hear how you liked it. Simply rate it with the stars above ⭐or leave me a comment and rate it below. 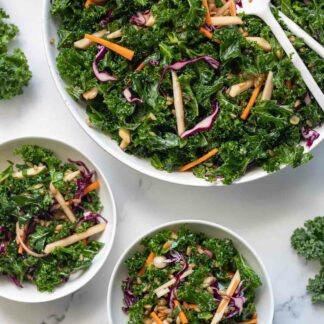 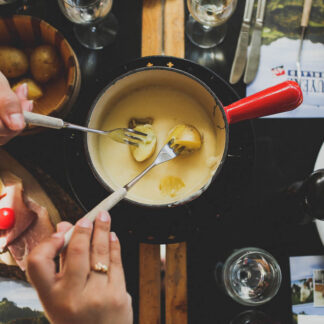 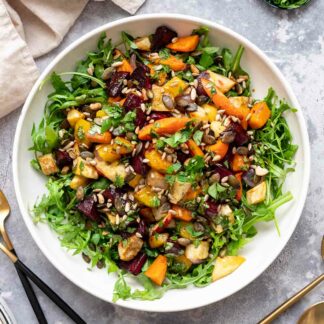